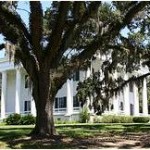 The South is so different from the rest of the country that sometimes I wonder why I don’t need a passport to travel from Boston to Roanoke. I like to tell my Southern friends, “I may not be a Southerner, but I am Southern,” in the same way that an American with Irish heritage can say “I’m not an Irishman, but I am Irish.” Although I was born and raised in Boston, I have always felt a strong connection to the South since my father’s family has resided in Virginia/North Carolina since the first colonists landed on its shores. I have had long arguments about this with my father, who insists that I am not Southern as much as I feel that I was born in the wrong place. Yet, he is the one who implanted this heritage in me, both genetically and spiritually. I am simply a person of Southern heritage who has spent most of her life elsewhere.

One of the things I love about the South is the region’s strong oral tradition that distinguishes it from places up North. Having heard stories about my father’s childhood since I was old enough to listen, I feel as though the South is part of me, even though many indigenous Southerners have told me that one must have spent a majority of their life in the South in order to truly claim cultural citizenship to the region. My Southern identity was first fostered in the sixth grade when everyone in my English class was instructed to tell a story in front of the school assembly. I chose to tell my favorite childhood story, “Uncle Daily and The Fly.” It is about a very stupid great, great uncle of mine who ate forty flies in one sitting as he continued to dip Aunt Liza’s fresh baked biscuits into molasses that was infested with these sordid creatures. My Granddaddy, affectionately called Little Lester (since he had another uncle named Big Lester), was fourteen at the time and was sitting next to Uncle Daily as he obliviously ate the flies. When Aunt Liza offered Little Lester some molasses, he politely refused and kicked Daily under the table to try to get his attention to no avail. Once the men had left the table to go back to work, Little Lester said “Uncle Daily, do you realize you just ate forty flies”? Daily responded “Awe what’s a fly?” and walked away. The audience erupted in laughter and after the assembly, people came up to me and asked for more stories about my crazy uncle of which there are several. As the third generation to tell this story, I feel connected to a family tree much larger than the story itself.

I like some aspects of the South that many Yankees consider to be ‘backwards’ or old fashioned. In an age pervaded with technological advancements and persistent stress, it’s nice to be able to retreat to a static place that resists change. I have always loved visiting my Granddaddy and step-grandmother Martha. Until I left for college, they were my only exposure to Southern culture. After spending a few minutes in their home, I feel like I am taking a trip back in time. They are always talking about the Great Depression and still have pictures hanging of ancestors who are long gone. They even have a photo of my father’s first wife in the guest room, but never hung one of my mother. Time just stopped for them and they don’t care to catch up with the rest of us. While this limits the types of conversations we can have, I like the slow, easy pace of life, sitting outside on the porch sipping iced tea, and then coming inside for a delicious meal: fried chicken, mashed potatoes with melted cheese, turnip greens with strips of bacon tenderly nestled between the leaves, biscuits and gravy, homemade apple sauce, and sweet potato pie and apple cake for dessert. Such a thing would never happen in Boston where people are always looking at their watches and gulping down instant coffee.

I also like the way Southerners appreciate their environment rather than simply rushing to the next destination. In the highly individualistic North, people are so focused on themselves that they don’t pay attention to where they are. Southerners have very strong ties to the land and my father passed this on to me through his stories and annual visits to the farm he grew up on. When I asked my father for his thoughts on the South, he said that it provided him with “a sense of place, home, and the ritualistic tobacco culture taught me the value of work and stewardship or taking care of what was given to me and what is meaningful. I felt a sense of communion with the land.” Although I was raised in the city, my father made a point of instilling in me an appreciation for the agrarian environment of our genealogical past. He also played an important role in the development of my personal work ethic. He has always been generous with his resources, but encouraged me to get my first job when I was thirteen. In this sense, his childhood experiences indirectly became a part of mine.

When my Granddaddy sold the farm that had been in our family for five generations, part of my father went with that farm. I felt like I had also lost something even though I had never pulled a plow across that rich red dirt and hadn’t spent eighteen years of my life singing gospel songs next to black workers in the tobacco fields.  I tried to tell my father that he could always go back to it, since the people who bought it were up in New Jersey, but he said that the South is synonymous with land. He explained, “if the land is taken away from you, you have no home and you have no South”. As Scarlet O’Hara’s father says, “land is the only thing that lasts.” My father ran away from the South because by staying in a blue collar town he would never have been able to achieve the American dream. The family farm was the source of his Southern stories that he passed along to me and my brother. As much as he says that he is done with the place, he doesn’t think his Yankee daughter has any business claiming an association to the region. This serves as evidence that my father still identifies with it.

I admit that my perception of the region is romanticized. The South has primarily been an internal place for me—an idea, a mystery, a way of life so intriguingly different from how I was raised. As a misplaced Yankee, I wish I had been born in the South which is odd because most of my Southern friends wish they had been born up North. I have fallen victim to the media’s portrayal of the South in movies like Gone With the Wind, Steel Magnolias, and Forrest Gump. Literature like Fanny Flagg’s Fried Green Tomatoes at the Whistle Stop Café doesn’t help to paint a more realistic picture of a place that has experienced great upheaval in the past two hundred years. However, my image of the South has drastically changed by living here.

Since coming to Hollins, I have been exposed to the downsides of this static culture. Things like racial tension and regional discrimination suddenly slapped me in the face. My freshman year, I lived on a hall with an even distribution of poor blacks and rich white daddy’s girls all of whom were from the South. Both groups disliked me because of my northern background and the blacks also condemned me because I am white which in their eyes automatically made me rich. Up North, people tend to be wary of getting too close to a new acquaintance, but they will usually either remain aloof or decide to befriend you depending on the circumstances.

On the other hand, Southern hospitality is initially extended to everyone, but can quickly turn to hate in the case of outsiders who challenge established customs and mindsets. Up North, there is too much racial and cultural diversity for any one way of life to be the norm, but in the South you need to fit into a predefined niche to be accepted. Being the assertive person I am, I confronted my hall mates and suddenly felt like a minority for the first time in my life. I knew that blacks had historically been discriminated against by whites and that Dixies were seen as inferior by Yankees, but it had never occurred to me that these trends could present themselves the other way around.

By stereotyping me, these Southern blacks actually caused me to feel hints of racism that I had never experienced before. One place this transpired is the school cafeteria where I have noticed a significant amount of self segregation on the part of black students who sit at “their table” while the whites (and other groups) congregate elsewhere. This reverse racism towards me instigated a sense of “white guilt” which ultimately turned to resentment and anger. I believe blacks isolate themselves from their white peers under the assumption that if they don’t do so, whites will exclude them; therefore, it is a type of defense mechanism. Having grown up in one of the most liberal parts of the country, I came to Hollins with absolutely no racist preconceptions about other ethnic groups and was offended that blacks thought I didn’t like them because of my ethnicity. College is supposed to open your mind and introduce you to new kinds of people. My mind has been opened in many ways, but this is one case where meeting new kinds of people has upset my romantic image of the South and caused my mind to be closed.

Despite my difficult encounters with the South, I still feel more at home here than anywhere else and don’t in any way identify with the region in which I was born. Perhaps I had a past life(s) in the South. Why else would I feel such a strong connection to a place I have never lived in for the exception of three years of college? Nevertheless, I love the South despite its flaws. Just like a person, it is possible to love a place and still accept its problems. In fact, it is impossible to know if one loves a place before witnessing and coming to terms with its drawbacks. My experiences at Hollins have tested my fondness for the region, but haven’t turned me against it. This is what makes it My South. Just like no two people can have exactly the same relationship as any other couple, no two people can have exactly the same relationship with a place. My relationship with the South is different from that of my father and most other Southerners. Yet, thanks to him, the South is not only in my blood, but also in my mind, heart, and character.

This entry was posted in Expository Writing. Bookmark the permalink.